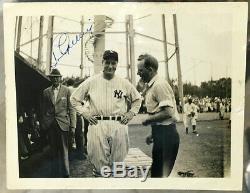 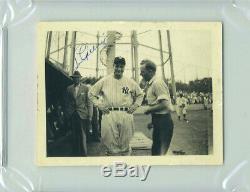 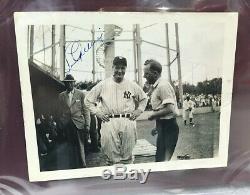 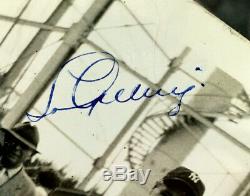 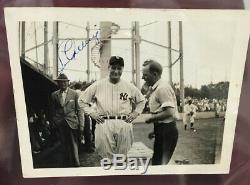 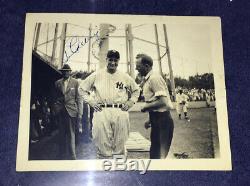 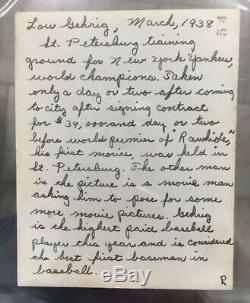 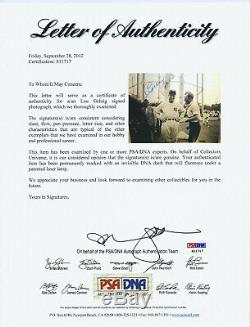 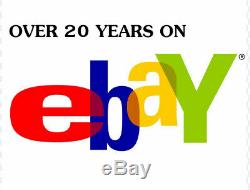 Authentic, very desirable signed photo of Yankees great Lou Gehrig in uniform, with outstanding background, provenance and candid image of him taken by the original owner. One of a kind photograph from 1938 of The Iron Horse was taken in St. Petersburg, Florida at Spring Training. Image measures 4 3/4 x 3 3/4 and shows Gehrig posed in front of the dugout, smiling, wearing his home jersey.

The other gent in the shot speaking with him is a photographer hoping to get a few more publicity photos for Gehrig's soon to be released movie "Rawhide". It was nicely signed by the Yankees star using a blue fountain pen in the upper left quarter. Terrific provenance here, with the original recipient's notation done neatly on the reverse in ink: Lou Gehrig.... Petersburg training ground for New York Yankees, World Champions.

The other man in the picture is a movie man asking him to pose for some more movie pictures. Gehrig is the highest paid baseball player this year and is considered the best first baseman in baseball. The movie premiered in St. Petersburg that March, before its nationwide release on April 8th.

As an added bonus, the scarce signed photograph also comes with an original snapshot of Lou signing autographs after getting off the team bus. The girl in the photo was the recipient of this piece, with a similar handwritten notation on the back which reads March 1938 - About to sign Jean's autograph book after getting off bus which brought World's Champion Yankees of New York to play practice game with St. Louis Cardinals The Cardinals Spring Training facility was also in St. This additional photo is the same size as the one autographed by Gehrig and is in Good condition, with aged tape at each corner. The signature of Larrupin' Lou is an 8 of 10 in quality.

The photograph looks even better in hand than my iPhone shots make it appear. There are both scans and camera shots above, so you have several different perspectives of what this gem will look like in your hands. Just a fine, 80+ year old keepsake. As a note: In my nearly 40 years of experience, I have found authentic signed photographs of Lou Gehrig very hard to come by and to be four to five times rarer than Babe Ruth signed photos; he was extremely tight with a buck and ALMOST NEVER sent a collector a photo of his own cost. The 1938 Lou Gehrig autographed photo.

Is guaranteed 100% original and authentic FOR LIFE. S housed in a PSA/DNA holder and also includes a full Letter of Authenticity from them. 100 or more RBI 13 years in a row, including 7 seasons of MORE THAN 150.

Never struck out 100 times in a season, even though he was a great HR hitter. Played 2130 games in a row, until ALS forced him to sit early in 1939. His uniform number was the first retired in baseball history. Died of ALS in 1941 just a couple of weeks before he would have turned 38 years old. The item "1938 LOU GEHRIG SIGNED PHOTO in YANKEES UNIFORM with GREAT PROVENANCE PSA/DNA" is in sale since Friday, March 6, 2020.

This item is in the category "Sports Mem, Cards & Fan Shop\Autographs-Original\Baseball-MLB\Photos". The seller is "slippedmickeyclickflip" and is located in Bohemia, New York.