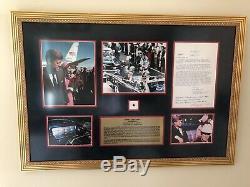 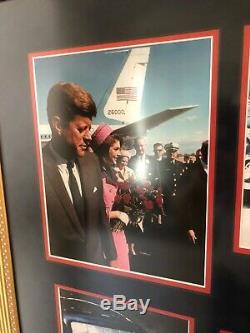 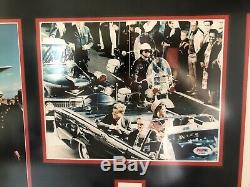 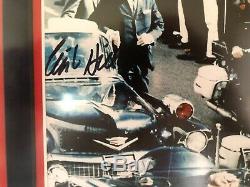 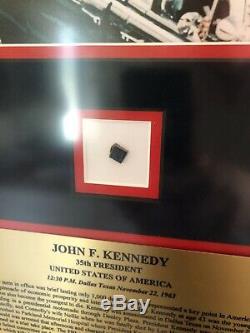 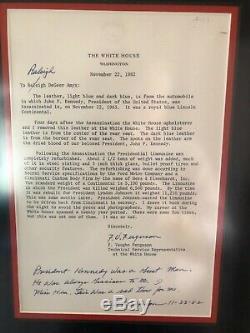 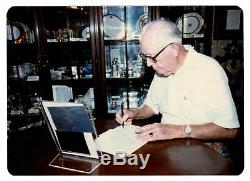 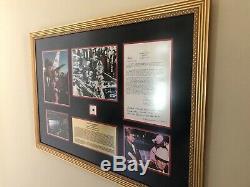 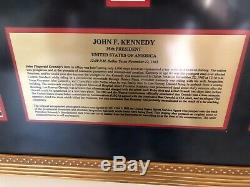 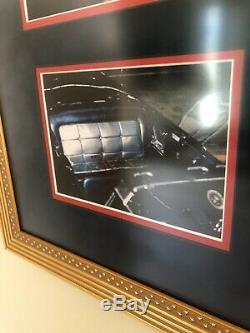 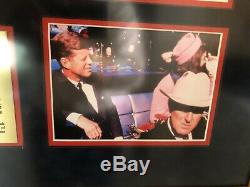 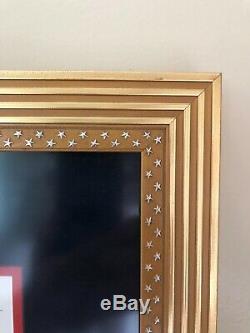 Dallas Texas November 22, 1963. Museum Preserved Framed Historical Display. Original DNA blood stained dark blue leather sample. From the back seat of the Presidential limousine John F. Kennedy was riding in at the moment of his. Assassination in Dallas on November 22, 1963. ORIGINAL PIECE OF BLOODSTAINED DARK BLUE SEAT LEATHER FROM THE LIMOUSINE KENNEDY WAS RIDING IN AT THE TIME OF HIS ASSASSINATION ON NOVEMBER 22, 1963.

The leather contains minor blood spatter, measures 5/8 by 3/8 in pristine condition and in this-one-of-a-kind historical museum preservation standards framed display we have also included an original hand signed 10 x 8 color high quality photograph signed by Secret Service Agent Clint Hill and further authenticated by PSA/DNA. Clint Hill was the Secret Service Agent who was riding on the back bumper of the Presidential limousine in Dallas on that day in infamy when the multiple shots were fired at our President.

Hill shielded the first lady Jacqueline Kennedy with his body protecting her danger. Vaughn Ferguson, the White House Technical Service Representative who was the only one permitted continual hands on contact with the limousine. The leather upholstery of the rear seat was removed by Ferguson four days after the assassinationlight blue from the main body of the bench-style seat and dark blue from the border areaand the car was sent to a Cincinnati firm for refitting and a security upgrade for President Lyndon B. The leather is accompanied with a packet of information that includes copies of letters, documents, photographs, and newspapers from Ferguson and Amyx regarding its provenance. THE LEATHER OF THE REAR SEAT WAS REMOVED BY THE WHITE HOUSE TECHNICAL SERVICE REPRESENTATIVE FOUR DAYS AFTER THE ASSASSINATION AND OUR HISTORICAL PRESIDENTIAL FRAMED.

IS ADDITIONAL ACCOMPANIED WITH A COMPLETE CHAIN OF PROVENANCE. AN ADDITIONAL POINT OF INTEREST. A unique relic related to the tragic assassination of our president.

Of 1963 was high noon for President John Fitzgerald Kennedy. Only one month earlier he had just "rocked the boat again" delivering his ground breaking "Peace Speech" at the American University. Conspirators were hard at work making plans to end his life in less than four months. Kennedy's term as President was only 1,000 days..

Here's an opportunity to own an extremely rare historical artifact containing the DNA of our late President John Fitzgerald Kennedy. With the amazing advancements made in the DNA science arena and ground breaking genetic research DNA samples are considered by many experts. To be the single most under valued collectible. Affordable to historical collectors with incredible upside potential. Historical figure DNA samples are becoming increasing difficult to still be able to find on the open market.

This is the last DNA sample of President John F. Kennedy we have available for sale and with the aggressive current advancements being made in Deoxyribonucleic Acid research these samples have the potential to soar in value overnight. So there you have it. Here is a truly stunning one-of-a-kind JFK very unique and valuable one-of-a-kind Presidential Museum Preservation Standards framed high quality display.

All the photographs in this display are printed on the highest quality acid free professional photograph papers available. The letter of provenance provided from Mr.

Ferguson is floated in window opening and all the photos and elements in this vintage collection display beautifully. We go the extra mile on all our museum framed collections. Time is of no concern building our historical displays. Sometimes taking years to build a single display, acquire all the exact elements, and get it done right. We spare absolutely no expense and cut no corners.

The laser engraved gold colored brushed aluminum plate is also floated inside it's own opening further highlighted on patriotic red acid free matt board. The entire display is overlaid and protected under museum grade UV glare free Plexiglas surface and measures approximately a large 24" x 35" and comes ready to hang in your office or den. Our framed investment rarities are true works of art.

The custom laser engraved brushed aluminum plate reads as follows. John Fitzgerald Kennedy's term in office was brief lasting only 1,000 days however, represented a key point in American history. The nation was prosperous and at the pinnacle of economic prosperity and international prestige. Kennedy at age 43 was the youngest man ever elected President, and he would soon also become the youngest to die. Kennedy was assassinated in Dallas Texas on November 22, 1963 at 12:30 p.

Central Standard Time in Dallas, Texas while riding in a presidential motorcade through Dealey Plaza. President Kennedy was riding with his wife Jacqueline, Texas Governor John Connolly, and Connolly's wife Nellie when he was fatally shot by Lee Harvey Oswald firing in ambush from a nearby building. The motorcade rushed to Parkland Memorial Hospital where President Kennedy was pronounced dead about thirty minutes after the shooting. Lee Harvey Oswald was arrested that afternoon and charged with the crime.

Jack Ruby shot and killed Oswald two days later, before Oswald could be questioned or a trial take place. The FBI and the Warren Commission officially concluded that Oswald was a lone assassin.

The United States House Select committee on Assassinations (USCA) agreed with the conclusion that Oswald, a CIA asset, and an alleged FBI operative, fired the shots which killed the President, but also concluded that Kennedy was probably assassinated as the result of a far reaching conspiracy. The original autographed photograph above was signed by Mr.

Hill the United States Secret Service Agent who jumped onto the back of the presidential limousine and shielded Jacqueline Kennedy while shots were being fired. This display also contains an original piece of President Kennedys bloodstained dark blue seat cover leather from the limousine he was riding in at the time of his assassination. The letter contained herein is self explanatory.

Our beloved President John Fitzgerald Kennedy was assassinated in Dallas Texas on November 22, 1963. Please note we are not photographers therefore the actual colors may vary somewhat from what you viewed when you ordered. Please read our feedback as the over-whelming majority of customers like the real thing much better.

Unfortunately our photos do not do our displays justice so be prepared to be very pleasantly surprised as to the quality of the actual delivered framed historical investment quality display. The item "JFK JOHN F. KENNEDY- DNA Bloodstained Leather Dallas Limo+ Autographed Photo-PSA" is in sale since Friday, July 12, 2019. This item is in the category "Collectibles\Historical Memorabilia\Political\US\Presidents & First Ladies". The seller is "themerchantofmemories" and is located in Marina del Rey, California.